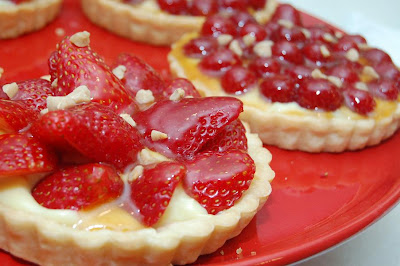 Last week was my birthday, so instead of going out, I decided to spend the afternoon making some delicious food. And you know what? Now that I think about it, I can't remember what I made for dinner. Even so, the dessert was wonderful. We're past the season really but I had a container of strawberries in the fridge that looked perfect. Normally by the time my birthday rolls around, it's peach season, so I was happy to have a strawberry dessert this year! I've made Dorie's Strawberry Tart before and loved it so I thought I would try Ina's and see how they compared. They are very similar, especially since I added a layer of pastry cream to Dorie's tart, which is already included in Ina's recipe. 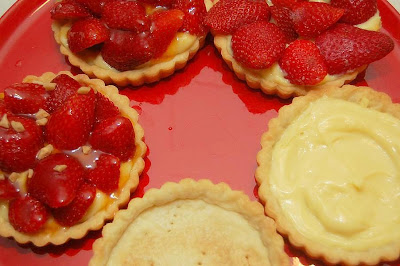 The pastry came together quickly in the food processor but the instructions were a little different. Ina has you freeze all of the ingredients (even the dry) so everything is nice and cold. I might try this next time provided I'm not in too much of a hurry. Then I filled the shells with some pastry cream (I loved Ina's technique with the stand mixer and will do this again). Then I placed some strawberries in the tarts, brushed them with a little apricot glaze, and sprinkled toffee bits on top. 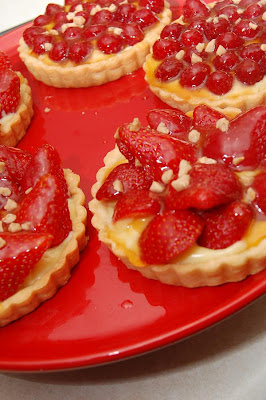 I decorated two of the tarts with raspberries and they looked so pretty (though I'm still devoted to strawberries). In the end, I think I prefer Ina's pastry cream but with stick with Dorie's tart crust. We all thought Ina's was a little hard, but not quite cookie-like, as Dorie's is. They certainly turned out beautifully and were the perfect birthday treat.

Put the flour, sugar, and salt in a food processor and pulse a couple of times to combine. Scatter the pieces of butter over the dry ingredients and pulse until the butter is coarsely cut in- you should have some pieces the size of oatmeal fakes and others the size of peas. Stir the yolk, just to break it up, and add it a little at a time, pulsing after each addition. When the egg is in, process in long pulses- about 10 seconds each- until the dough, which will look granular soon after the egg is added, forms clumps and curds. Just before you reach this stage, the sound of the machine working the dough will change- heads up. Turn the dough out onto a work surface and, very lightly and sparingly, knead the dough just to incorporate and dry ingredients that might have escaped mixing.

To press the dough into the pan: butter a 9-inch fluted tart pan with a removable bottom. Press the dough evenly over the bottom and up the sides of the pan, using all but one little piece of dough, which you should save in the refrigerator to patch any cracks after the crust is baked. Don’t be too heavy handed- press the crust in so that the edges of the pieces cling to one another, but not so hard that the crust loses its crumbly texture. Freeze the crust for at least 30 minutes, preferable longer, before baking.

To partially or fully bake the crust: center a rack in the center of the oven and preheat to 375 degrees F.

Butter the shiny side of aluminum foil and fit the foil, buttered side down, against the crust. (since you froze it, you can bake it without weights). Put the tart pan on a baking sheet and bake the crust for 25 minutes. Carefully remove the foil. If the crust has puffed, carefully press it down with the back of a spoon. For partially baked crust, patch the crust if necessary, then transfer the crust to a cooling rack. To fully bake the crust, bake for another 8 minutes or so, or until it is firm and golden brown. Transfer pan to a rack and cool the crust to room temperature before filling.

In the bowl of an electric mixer fitted with the paddle attachment, beat the egg yolks and sugar on medium-high speed for 4 minutes, or until very thick. Reduce to low speed, and add the cornstarch.

With the mixer still on low, slowly pour the hot milk into the egg mixture. Pour the mixture into a medium saucepan and cook over low heat, stirring constantly with a wooden spoon, until the mixture thickens, 5 to 7 minutes. Don't be alarmed when the custard comes to a boil and appears to curdle; switch to a whisk and beat vigorously. Cook, whisking constantly, for another 2 minutes; the custard will come together and become very thick, like pudding. Stir in the vanilla, Cognac, butter, and heavy cream. Pour the custard through a sieve into a bowl. Place plastic wrap directly on the custard and refrigerate until cold.

To assemble the tarts:

Immediately before serving, fill the tart shells with the pastry cream. Arrange the berries decoratively on top of the cream. Melt 1/3 Cup Apricot Jelly with 1 teaspoon of water and brush the top of the tarts. Sprinkle with pistachios (or toffee bits), if using, and serve.
Posted by Anne