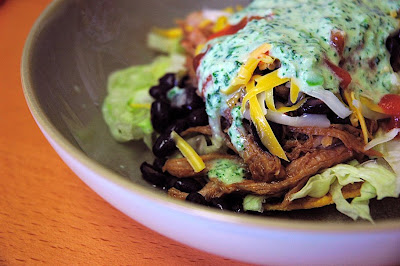 Today has been a good day. My car was commandeered for a trip so I "had" to drive my Dad's BMW (it's going to be a long weekend! Yay!) Then I was weighed for my life insurance and I've lost 18 pounds since last summer. I swear you can't tell but I'm working on it. So I guess my Food Network diet is working anyways! Then when I went to the grocery store pork loin was on sale, which prompted this post and my soon to be dinner. I've been meaning to post this recipe for a while. It's so easy and seriously delicious. I originally found it on Pimp My Dinner and like everything I've tried there. I've made a few modifications and get rave reviews every time so here goes. Not only is it cheaper than the real deal, you don't have to wait in line forever in the snow like we used to do in the Provo Cafe Rio. Here's to a good day and a great dinner! (and to my brother in law for the perfect photos... thanks Jared!) 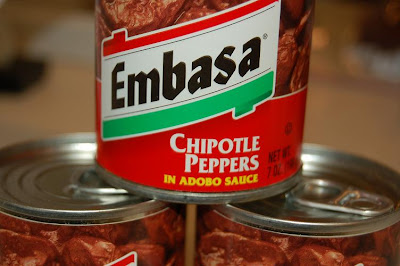 First, open the can of chiles and drain the sauce into the Crockpot. Then discard the chiles. Chipotles are just roasted jalepenos and are plenty hot- so omit them unless you want lots of heat! I can find this stuff in the Mexican food aisle at Fry's but not Safeway, so look around. Don't use the plain Adobo sauce (mine came in a tall little jar with a yellow lid) because the flavor is all wrong and I had to throw my last batch of pork out!

Then add sugar, mustard, cumin, garlic, and Dr. Pepper. Stir everything and toss in the trimmed, whole pork loin. Try piercing it a few times so the flavor steeps in during cooking. Rotate throughout the day and after about 5 hours on high the meat should be shred-able. Reduce heat to low, pull apart the meat with two forks and leave the lid off the Crockpot for a bit to let some of the extra liquid evaporate and soak into the meat (the longer it cooks shredded the tastier it will be, just watch and make sure there is enough liquid).

Meanwhile, make the dressing in a blender. Serve pork with tortillas, black beans, shredded lettuce, diced tomatoes, shredded cheese, and cilantro dressing. Dish it up and enjoy! I also like topping it with a squeeze of fresh lime juice. Try serving as a burrito or as a salad- both are delish! 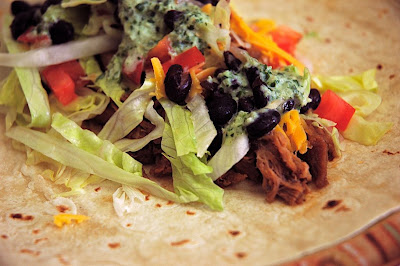 Blend all ingredients (except lime) in a blender and let thicken in the fridge. For more spice, add a Serrano pepper. Serve with a squeeze of fresh lime and enjoy.
Posted by Anne