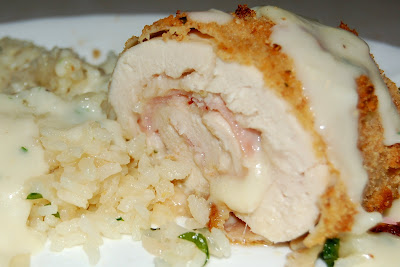 A few weeks ago I made Ina's Chicken Parmesan and it turned out great so I thought I would take it a step further and try Chicken Cordon Bleu. I used to work at a wedding reception hall and we served this all the time. I think this was just as tasty! I read several recipes and then went for it, so here is my version (so I can make it again, and hopefully someone else will enjoy it too!) This make pretty big portions so I might try butterflying the breasts and making half portions next time, or just serve up a half for those with smaller appetites (the men at my place both finished up a whole piece no problem, though!)

First, pound the chicken with a rolling pin or mallet in a gallon baggie. Get it as thin as you can, around 3/8 of an inch, without it falling apart.

Set up three shallow dishes for the breading. In the first put the flour. Put the egg and milk in the second and beat to combine. In the last, add the breadcrumbs, Parmesan cheese, parsley, and a little salt and pepper. This is the order for the breading (always always) FLOUR, EGG, CRUMB.

After all four chicken breasts are bundled up, bread them in the egg mixture followed by the breadcrumbs. Try to seal up the ends and give the chicken a nice shape. Lay them in a baking dish (I used a 9 x 13 pan) and put a light drizzle of extra virgin olive oil on top.

To make the sauce, make a roux to form a white sauce (2 T. flour and 2 T. butter). Whisk in 1 cup chicken stock, 1 cup milk, and cook until thick and bubbly. Add 2 T. fresh chopped flat leaf parsley and pepper to taste. I also added a pinch of chili powder.

Top chicken with sauce and serve with mashed potatoes or rice pilaf and salad. Don't forget to remove the toothpicks before serving! :)
Posted by Anne