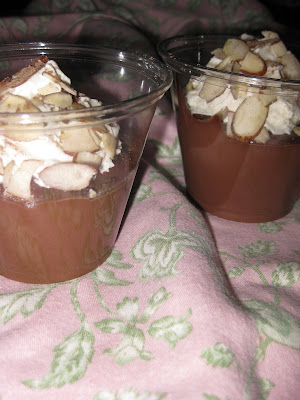 When I told a few people this week's "Dorie Treat" was chocolate pudding, they kind of looked at me with a blank stare, and I knew they were thinking, "Shouldn't it be some fancy French tart or elaborate cake or something?" Well, I'll admit I kind of thought that, too, but once I read Dorie's description on her blog and in the book I realized there is a little more to pudding. Then, after I went the week without sugar or any artificial sweeteners as a sort of dare, I was ready for pudding.

Also, I had a few days without my wonderful camera and I was missing it like crazy too! Pardon the pictures, but the pudding tasted great anyways. It was rich and so chocolaty. I needed lots of whipped cream to balance the deep chocolate, but I know lots of chocolate lovers who would have loved it straight from the cup. I might try making it swirled with vanilla next time... a little less rich but enough chocolate that you can still appreciate the amazing taste.

Since joining TWD, I burn through chocolate, butter, and eggs like they're going out of style. Seriously, though, I am continually amazed at the huge variety of things you can make with those basic ingredients. So even though pudding seems less dramatic than some of the other things we have made, it's no less delicious or impressive (I'm always shocked and amazed when the pudding thickens almost instantly!)

Now, this is what Dorie says, about pudding-

"for many of us, I'm sure - the sweetness of pudding begins even before the first spoonful because there's something serene, sensuous and satisfying in the act of just making pudding." 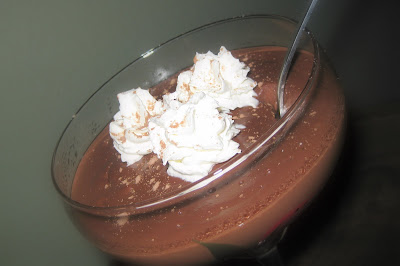 Now I know, after reading that, you are visualizing what kind of chocolate you have in your pantry. So go make it! You can find the recipe on Dorie's wonderful blog or at It's Melissa's Kitchen. Thanks for a great choice Melissa! I'll never look at boxed pudding the same again!
Posted by Anne