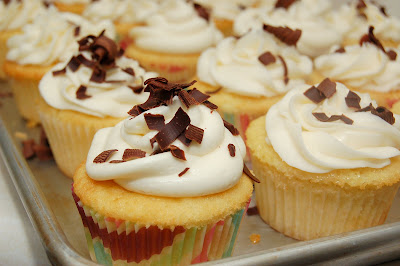 This week's Tuesday's with Dorie selection came from Tara of Smells Like Home. She chose Traditional Madeleine's but there was an option to go back to a previous recipe if you don't have the proper pan for the Madeleine's. Since I knew I'd get more rolled eyes at the mention of a new pan, I was happy to choose something I missed. I decided on the Black and White Chocolate Cake since I've been eyeing it since I bought the book. 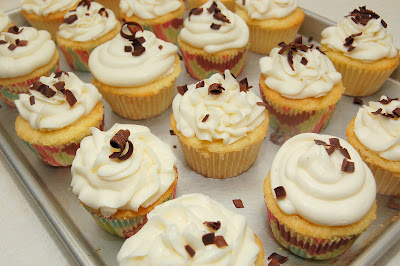 As usual, I made several modifications. I made cupcakes because I was sharing this dessert and didn't want it to require utensils and more. Then, I piped the chocolate pudding into the center of the cupcake with a pastry bag after baking and cooling. It was simple and worked well. I also loved that the pudding inside the cupcake was kind of a little surprise- you didn't know it was there until after you bit into it! I frosted the cupcakes and topped them with some chocolate shavings. 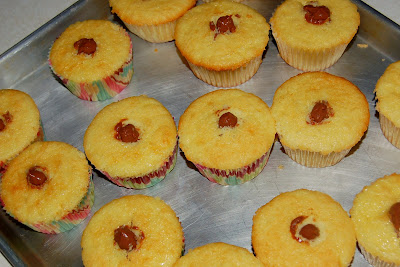 As for the white chocolate frosting, I went against my better judgment (and Dorie's) and used the Toll House chips I had on hand. My cream whipped up great but when I added the chocolate I suddenly had white chocolate butter. So, I made my regular frosting and it worked out great.

I LOVED the combination of the frosting with the pudding, though I wasn't in love with the cake. I'm not a good judge, though, because I've never like cake, I just like making them and snitching the frosting! These were beautiful cupcakes and I really enjoyed making them. It was quite the process with the batter, frosting, and pudding, but I think it was worth it. I had a nice time putting everything together and, as usual, loved making my "Dorie" treat for the week. 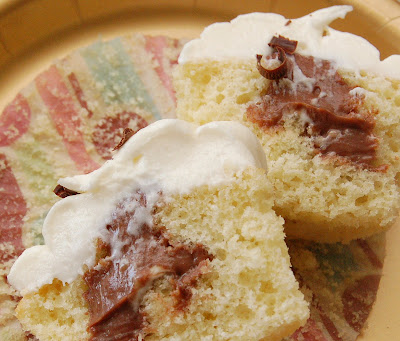 Black and White Chocolate Cake
From Dorie Greenspan's “Baking: From My Home to Yours”

For the White Chocolate Whipped Cream (I made my favorite frosting after my first attempt failed)
6 ounces premium-quality white chocolate (such as Valrhona Ivoire or Guittard), finely chopped
1-1/2 C. heavy cream

Chocolate shavings or curls, dark or white or a combination, for decoration (optional)

Getting Ready:
Center a rack in the oven and preheat the oven to 350 degrees F. Butter two 9-x-2-inch round cake pans, dust the insides with flour, tap out the excess and line the bottoms of the pans with parchment or wax paper. Put the pans on a baking sheet.

To Make the Cake:
Sift together the cake flour, baking powder, baking soda, and salt.

Working with a stand mixer, preferably fitted with a paddle attachment, or with a hand mixer in a large bowl, beat the butter on medium speed until soft and creamy. Add the sugar and beat for another 3 minutes. Add the eggs one by one, and then the yolk, beating for 1 minute after each addition. Beat in the vanilla; don’t be concerned if the mixture looks curdled. Reduce the mixer speed to low and add the dry ingredients alternately with the buttermilk, adding the dry ingredients in 3 additions and the milk in 2 (begin and end with the dry ingredients); scrape down the sides of the bowl as needed and mix only until the ingredients disappear into the batter. Divide the batter evenly between the two pans and smooth the tops with a rubber spatula.

Bake for 28 to 30 minutes, rotating the pans at the midway point. When fully baked, the cakes will be golden and springy to the touch and a thin knife inserted into the centers will come out clean. Transfer the cakes to a rack and cool for about 5 minutes, then unmold, remove the paper and invert to cool to room temperature right side up on the rack. (I baked my cupcakes for about 25 minutes)

To Make the Dark Chocolate Cream:

Bring the milk to a boil.

Meanwhile, in a large heavy-bottomed saucepan, whisk the egg yolks with the sugar, cornstarch and salt until thick and well blended. Whisking without stopping, drizzle in about 1/4 cup of the hot milk - this will temper, or warm, the yolks so they won’t curdle - then, still whisking, add the remainder of the milk in a steady stream. Put the pan over medium heat and, whisking vigorously, constantly and thoroughly (make sure to get into the edges of the pan), bring the mixture to a boil. Keep at a boil, still whisking, for 1 to 2 minutes. Remove the pan from the heat.

Whisk in the melted chocolate, and let stand for 5 minutes. Then whisk in the pieces of butter, stirring until they are fully incorporated and the chocolate cream is smooth and silky. Press a piece of plastic wrap against the surface of the cream to create an airtight seal and refrigerate the cream until chilled, or for up to 3 days. Or, if you want to cool the cream quickly, put the bowl with the cream into a large bowl filled with ice cubes and cold water and stir the cream occasionally until it is thoroughly chilled, about 20 minutes.

To Make the White Chocolate Whipped Cream:
Put the white chocolate in a heatproof bowl and put the bowl over a saucepan of gently simmering water. Stir frequently to melt the chocolate evenly. Meanwhile, bring 1/2 cup of the heavy cream to a boil.

When the white chocolate is melted, remove the bowl from the pan. Pour the hot cream into the melted chocolate and let it sit for a minute. Using a small spatula, stir the chocolate gently until it is smooth. Let it sit on the counter until it reaches room temperature - it can’t be the least bit warm when you add it to the whipped cream.

Working with the stand mixer with the whisk attachment or with a hand mixer in a large bowl, beat the remaining 1 cup heavy cream only until it holds the softest peaks. Turn the machine to high, add the cooled white chocolate all at once and continue to beat until the whipped cream holds firm peaks. Turn the whipped cream into a bowl, press a piece of plastic wrap gently against the surface to create an airtight seal and refrigerate for at least 2 hours, or up to 6 hours.

To Assemble the Cake:
If the tops of the cake layers have crowned, use a long serrated knife and a gentle sawing motion to even them. Slice each layer horizontally in half. Place one layer cut side down on a cardboard cake round or on a cake plate protected by strips of wax or parchment paper.

Refrigerate for at least 3 hours, or overnight.

Serving: Remove the cake from the fridge about 20 minutes before serving. Use a serrated knife and a gentle sawing motion to cut it. Though the cake is particularly good with coffee or tea, it also goes well with a sweet or sparkling dessert wine.
Storing: While both the dark chocolate cream and white chocolate cream can be made ahead and kept tightly covered in the refrigerator, once assembled, the cake is best after about 3 hours in the fridge. However, it can be refrigerated overnight - just cover it loosely and keep it away from foods with strong odors.
Posted by Anne