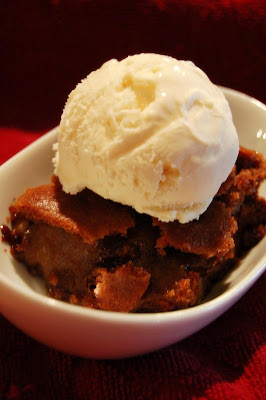 Nestled away in this little dish and covered with deliciousness, these cookie topped brownies almost look like a success. But don't be deceived. After plenty of time in the kitchen, more butter than Paula Deen could stomach, and lots of tasty chocolate- these brownies go down in my TWD repertoire as a big fat (and delicious) failure. 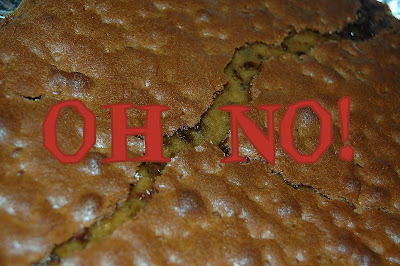 After only fourty minutes in the oven they were totally browned and smelled done. I knew the top couldn't take any more and should have tented them early on, but I was distracted by articles about not eating the batter after I had finished eating some of the most delicious brownie batter I've ever tried. It was too late, so I removed them, and after cooled, was shocked by this molten caramel river of goo running through the brownies! I'm not one to shy away from undercooked foods, though (except for ground beef) so I grabbed a spoon. While they were delicious, they were disappointing. I'll have to try again and get a few tricks up my sleeve from the other bakers- because with this much butter and chocolate, this recipe has got to be worth it, right? *Update* After sitting over night, these are much more cohesive and freaking good. Dorie wins again (even if they don't look so hot!)

And stay tuned for next week's Cinnamon Squares, some amazing Ina recipes, and the results from my ultrasound later this week! It is a boy or a girl? Your guess is as good as mine...
Posted by Anne