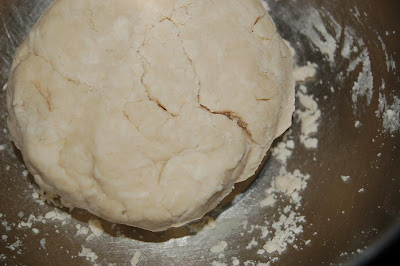 My Aunt CarmaLee makes amazing pies. So does my mom. I remember making pie with them when I was little- using the pastry cutter, rolling the dough, and even making pie crust cookies (dough brushed with cinnamon sugar, cut into squares, then baked) with the left over crust. So while I can't say when I learned to make pie, I do remember learning that lots of people didn't know how to, which was a big shock to me!

One thing that's worth noting is that the weather and altitude really can affect your pastry. I'd always lived in Arizona and was in for quite a shock when I started baking in Utah. The first time I made pie up there my dough was a sticky mess and I was so frustrated until it came out of the oven flaky and perfect! Now that I'm back in the dessert, I sometimes add a little extra water to the paste mixture until I reach the right consistency. Just remember not to over work the dough so you get a nice flaky crust. 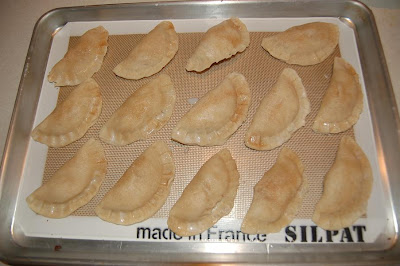 So... I made some hand pies with my left over berries from TWD this week. I whipped up the pie dough and liked those as much as the cobbler. It's simple, too- just roll out the dough, cut out about 5 inch circles, put a little filling in, and seal the pies with egg was around the edges. Brush the tops with milk and sprinkle with cinnamon sugar.

I love pie, and it's easy! This recipe comes from an old friend of my mom's. I'd never met her until about three months ago when we ran into her at Costco and my mom said, "Anne, this is Conni" and I practically started bowing down to her and told her how much I LOVE her pie crust recipe! She laughed and said something to the effect of, "I haven't even made that in forever!" but it was fun to meet her and to hear she and my mom reminiscing about when they were newlyweds.

The recipe calls for lemon or vanilla added to the liquid, depending on the filling. I usually make a double batch and then make quiche with half and apple pie with the rest. It's a pretty fast meal and really homey and comforting- especially if you use left over Christmas Ham, the seasoning is amazing! The quiche recipe is also really flexible- go Southwestern with pepper jack and bacon, or Italian with a little Parmesan and Pancetta.

Here's one good tip- when you're measuring shortening, cut a piece of saran wrap a little bigger than your measuring cup and lay it over the top before you spoon the shortening in. Then, just pull it out and dump the shortening into your bowl. Your cup stays clean, you get a good measurement, and your hands don't get slimy. That's a good deal to me.

With your fingers or a pastry cutter, blend into small pebbles:
2 Cups of Flour
1 teaspoon of Salt
3/4 Cup of Crisco 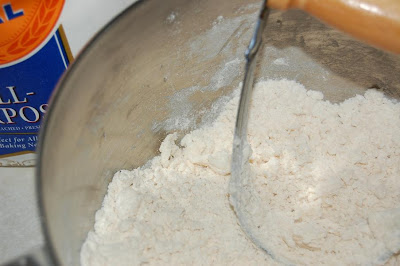 Then, make a paste by shaking these ingredients in a screw-top jar:
1/4 Cup of Flour
1/3 Cup of Cold Water
1 teaspoon Vanilla or Lemon juice 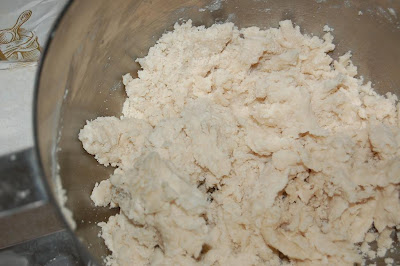 Pour the paste over the pebbles and stir lightly to combine. Divide the dough into two disk shaped pieces and refrigerate for a few minutes. Roll out and bake according to recipe. Yields two pie crusts.

Note: For quiche, I like to bake the crust for a few minutes before adding the filling so the crust cooks better. 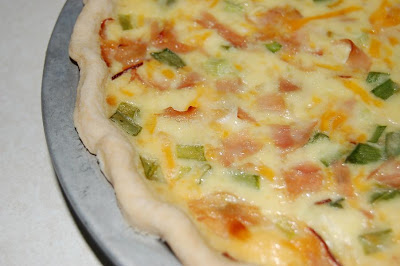 Blend eggs, mayo, milk, and starch with a fork in a medium bowl. Once all ingredients are smooth and combined, add the cheese, onion, and ham. Stir to combine and pour into crust.

Baked at 350 degrees for about 35 minutes until the filling starts to firm and brown a little.
Posted by Anne