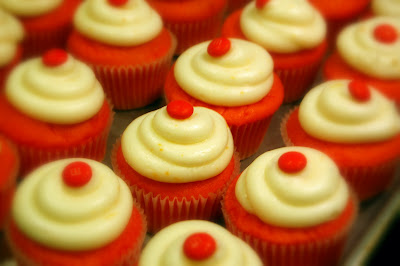 My little man is three. I'm in total shock. He's been all about birthdays lately (what with everyone else in the family having a summer/fall day- so he's had a lot of birthday experiences to remember!) When his started getting close he kept asking for orange cupcakes and orange balloons. My mom asked him a couple weeks ago what we would have for his birthday and he again insisted, "People always have cupcakes for their birthdays!" She then said, "Sometimes people have brownies," to which he quickly replied, "Cupcakes with brownies on top?"

Maybe next year I'll make the cupcakes with brownies on top happen. For this year, though, we made Orange Cupcakes (my little man is a very willing helper when it comes to baked goods- sits right on the counter and is in charge of dumping in ingredients and locking and unlocking the mixer). I flavored a yellow cake with orange zest and made orange frosting by adding orange zest and subbing fresh orange juice for the milk in my usual cream cheese frosting. I also made a batch of chocolate cupcakes, thinking only the kids would go for the obnoxious orange colored food. I was wrong- the newly dubbed "Orange Creamsicle Cupcakes" flew off the pan (which explains the crappy picture, no time to play with your food when guests are clamoring!) Try these- they're good for adults and kids alike, although I would definitely go with a milder orange color if you aren't catering to the kiddos! 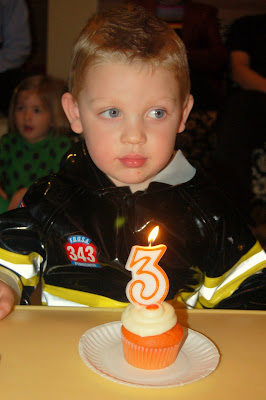 Orange Creamsicle Cupcakes for my Little Man
by Anne Strawberry

Combine all ingredients except food coloring in stand mixer and mix on low to combine, about one minute. Then increase speed to medium high for two more minutes until well blended. Add drops of food coloring to achieve desired color and mix lightly until incorporated.

Using an ice cream scoop, portion batter into lined muffin tins and bake for 20 minutes, or until cupcakes spring back which touched with a finger tip and they look done.

Cream the cream cheese, butter, and orange zest until smooth and well combined. With the mixer off, add the powdered sugar. Cover with a clean dish towel and combine on low speed until the sugar is incorporated. Remove towel and increase speed to make a smooth frosting, adding orange juice or more sugar until desired consistency is reached. Using a large tip (or a gallon baggie with a small corner clipped off) pipe onto cooled cupcakes.
Posted by Anne