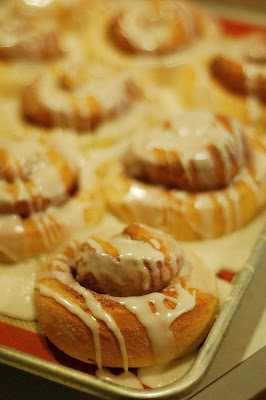 My Tall Man loves Cinnamon Rolls (well, he loves any white bread and nearly all carbohydrates, but he especially loves Cinnamon Rolls) so I decided to make them for his birthday treat again this year (that was a few weeks ago- before the baby- don't worry, I'm not wrestling with yeast and a newborn yet!).

I've made a few recipes in the past that I felt weren't worth the trouble or the calories. I love Dorie's Pecan Sticky Buns and made those for his birthday last year but since I was nine months pregnant and exceedingly sick of watching the numbers on the scale creep up higher and higher I wanted something lighter. So, I tried Peter Reinhart's version from the Bread Baker's Apprentice after I saw so many delicious posts about it (check out Nancy's here for some good tips). The dough is sweet and flavorful but not heavy and rich like some other versions. It's also not too "bread-y" so this still feels like a special dessert... or delicious breakfast. They also don't bake up with that hard, yucky sugar crust on the bottom of the roll which I've had happen to me a few times (maybe that's because there isn't any butter spread on the rolled out dough?)

View the complete recipe here (page 143). I've posted a quick version for my own records here, since I'll be making these regularly and can never seem to keep track of the paper copies!

NOTE- Do NOT double this recipe in your KitchenAid. The second time I made these I did that and I ended up kneading the dough by hand, worrying I'd nearly killed my beloved Empire Red, and generally just regretting my decision. It only takes a few minutes to whip these up in your mixer so just be patient and do so in two batches- trust me!

Let me know if you've made this recipe before and if you have any recommendations on whole wheat flour, different flavors (I'm trying orange rolls next time), or general tips. I'm far from a bread expert which is why I loved this recipe- he really walks you through it in the book and even with little experience these turn out great.

Cinnamon Rolls
from the Bread Baker's Apprentice by Peter Reinhart

Cream together sugar, salt, and shortening on medium high speed in mixer with paddle attachment. Whip in the egg and lemon zest until smooth. Then add the flour, yeast, and milk. Mix on low speed until the dough forms a ball. Switch to the dough hook and mix for about 10 minutes on medium, or until the dough is silky and supple, tacky but not sticky. Add a little flour or water if necessary to attain this texture.

Lightly oil a bowl and transfer the dough into it, cover, and let rise for about 2 hours, or until doubled in size.

Lightly flour or oil a counter and roll the dough into a rectangle about 2/3 inch thick, or 18 by 9 inches wide. Sprinkle the cinnamon sugar over the dough and roll it up into a log, with the seam down. Slice the log, making the pieces about an inch thick. Place on a parchment or silpat lined baking sheet and let rise until nearly doubled (about an hour in my lovely desert home).

Bake at 350 on the middle rack for 20 to 30 minutes, or until gold brown. Remove from oven, let cool, and glaze with powdered sugar icing or cream cheese icing.

Cream the cream cheese and butter until smooth and well combined. Beat in the vanilla then, with the mixer off, add the powdered sugar. Cover with a clean dish towel and combine on low speed until the sugar is incorporated. Remove towel and increase speed to make a smooth frosting, adding milk until desired consistency is reached.