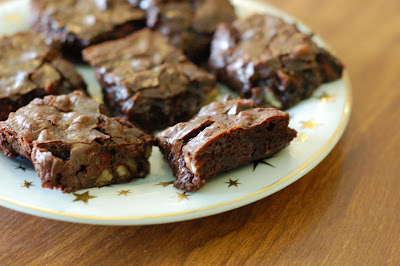 Another week, another brownie. I've made several lately, it seems- Ina's Outrageous Brownies and Dorie's Chipster Topped Brownies, not to mention some that didn't get photographed. I've decided that while an over baked brownie is hardly worth eating, an under baked brownie is practically impossible to eat. I've had a few rivers of chocolate instead of sliceable brownies and so I'm recommitting to cooking my brownies a little bit longer.

As for flavoring, I love the chocolate chips and the pecans. I don't do coffee, so I just omitted that and and added a little extra vanilla. I also skipped the cinnamon (though I loved it in the French Brownies) for the sake of my guests.

These brownies are quick and easy to throw together and if you are a slacker and avoid sifting, you will only need to dirty one little pan. I like that. I put off making these for a while before I read the whole recipe and realized these would come together in 10 or 15 minutes. I'll be making these again, and even baking them all the way. :) 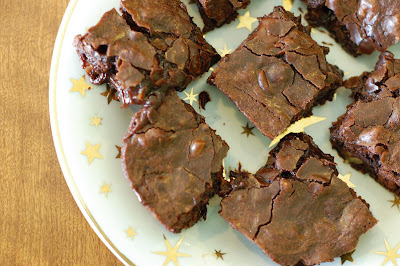 Thanks Lisa for the fun choice and for the beautiful new TWD Logo. Grab the recipe at her blog or here.

For my favorite brownies yet, check out these links:
Oreo Cheesecake Brownies with Mint Ganache
French Chocolate Brownies

Don't miss next week's Tuesdays with Dorie recipe... Brioche Plum Tart. I haven't even looked at it yet but I'm sure I won't miss anything with the word "brioche" in it! 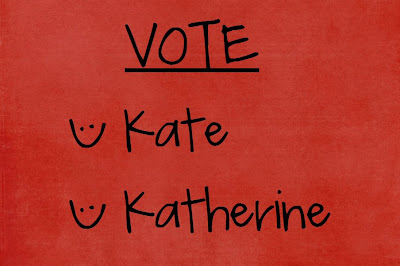 Now for the name debate... since these are Katharine Hepburn brownies, I'd love some opinions on the name. This name is topping the list right now for our little girl but we can't decide what to do. Do you think she should be named Katherine if the intent is to always call her Kate? Or should Kate just be Kate and be spared the need to correct it all the time? Spill people. With a name like Anne (pretty much free of options) I need some good opinions.
Posted by Anne