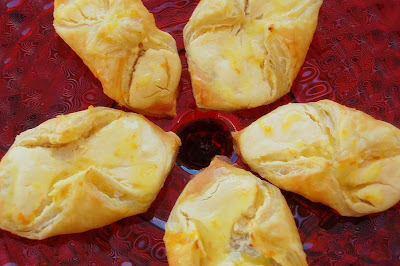 When I realized today that this was my 100th post, I found it oddly fitting since my first post was about Ina as is this one. I'm still constantly impressed by the Barefoot Contessa's recipes, although I try to keep the flavor with a little less fat. For these danishes, I started by reducing the portion size- halving the recipe and cutting the pastry sheet into 9 pieces instead of 4. I also subbed out Neufchatel cheese for the cream cheese and used egg beaters instead of egg yolks. As for the Ricotta, I didn't have any on hand so I opted to use Cottage Cheese. To make up for the texture I just blended everything with an immersion blender. The end result was delicious, smooth, and rich- a nice balance of creamy filling and flaky crust. 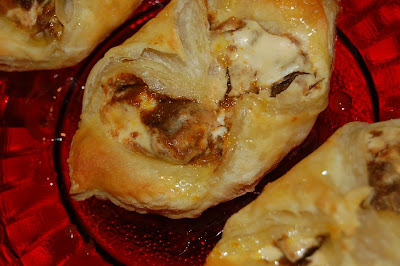 I also made a few pumpkin swirl danishes by mixing in some cinnamon and pumpkin puree. They were tasty for fall and I love anything with cinnamon! 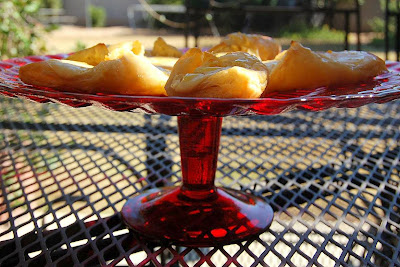 Pardon the vanity shot of my new platter I carried home from Greece. I didn't think it would make it home in one piece but I was pleasantly surprised when it did!

This weeks Barefoot Bloggers bonus recipe was chosen by Val and I was SO excited when I saw it. I love cheese danish and recently have developed a bit of a love affair with puff pastry. These came together quickly, the most time extensive part involving softening the cream cheese!

Place the cream cheese & sugar in bowl of an electric mixer fitted with paddle attachment and cream together on low speed until smooth. With the mixer still on low, add the egg yolks, ricotta, vanilla, salt, and orange zest and mix until just combined. Don’t whip! If the mixture is not perfectly smooth, blend together with an immersion blender.

Unfold one sheet of pastry onto a lightly floured board and roll it slightly with a floured rolling pin until it’s a 10×10 inch square. Cut the sheet into three each direction to make nine squares.

Place a tablespoon of cheese filling into the middle of each of the 9 squares. Brush the border of each pastry with egg wash and fold two opposite corners to the center, brushing and overlapping the corners of each pastry so they firmly stick together. Brush the top of the pastries with egg wash. Place the pastries on the prepared sheet pan. Repeat with the second sheet of puff pastry and refrigerate the filled Danish for 15 minutes.

For Pumpkin Swirl- combine the pumpkin puree with equal parts cheese filling and gently stir- don't overmix! Spoon the mixture into the pastry as described above.

Bake the puff pastries for 20 to 23 minutes, rotating the pan once during baking, until puffed and brown.

To make the glaze-
Combine orange juice, zest, powdered sugar, and meringue powder and whisk until smooth. It should be a pourable consistency. Adjust liquid until the glaze drips from the spoon and then drizzle over the danishes.
Posted by Anne